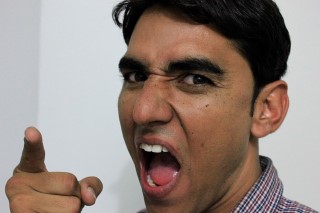 What a huge knock-on effect from presenters not getting their message across well!

Now, you’ve likely noticed that poor presentations almost always have lots of bullet points. So you might naturally assume that to be an effective presenter, you should ban all bullets from your slides.

But if you think that, I’m here to tell you: You’re wrong.

There are better ways to present a list than with bullets

Sure, there are better ways to present a list than with bullets on a slide. (At the end of that post, also see the many bullet-alternatives suggested by other bloggers, like Connie Malamed and SlideTeam.)

It’s just that you mightn’t have enough time to smarten up your slide like suggested by those posts. And besides, if you focus too strongly on avoiding bullets, you might cause yourself other problems. Let’s look at a real-life example to see how…

A few years ago, I watched a webinar presented by a well-known author. He’s written a book about how to present, and he runs a presentations consultancy. He also hates bullet points with a passion!

So in his webinar, he didn’t use a single bullet point. (In fact he used very little text at all. Kudos to him on that.)

Sadly though, what he did instead was fill every slide with either a photo or a cartoon-like picture, with just 2 or 3 words on it at most. And what’s more, in his 50-minute talk, he showed almost 180 slides – and they were all exactly like that.

50 minutes of rapid-fire pictures. What an onslaught!

If you do the maths, you’ll realise he showed each slide for just over 15 seconds on average. Imagine sitting through 50 minutes of rapid-fire pictures. What an onslaught!

There were no charts, diagrams, quotes, screenshots, statistics, or other visuals to help persuade his audience, or to give them variety and mental “breathing room”. Just dozens upon dozens of samey, sleep-inducing slides…

My point is, bullet points themselves aren’t the problem. The problem’s having too many similar slides. (It doesn’t matter whether they have bullets on them, or pictures, or charts, or anything else.)

So to avoid giving a poor slide presentation, don’t try to avoid bullets at all costs. Instead, give your audience varied content that’s thought-provoking (but without overwhelming them), and with just enough visuals to support what you’re saying.

Your audience’ll love you for it. And most importantly, your talk’ll be much more likely to achieve what you intended!

What do you think? How much of a problem do you think bullet points are in a presentation?