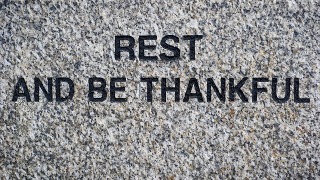 You might’ve heard some people (especially members of Toastmasters) say not to thank your audience at the end of your talk.

But you’re less likely to have heard any reason for that advice. So in this post, you’ll find these 4 topics to address that issue, and to help you with your speaking:

Why you might choose not to say thanksScroll to Contents ↑

Due to what are known as primacy and recency effects, your audience is more likely to remember the first and last things you say, which makes the opening and closing lines of your talk vital.

What’s more, thanking people has nothing to do with your topic, and it therefore slightly weakens your message. That’s why some people advise you not to say thanks (at the start or end of your talk).

So, the advice is well-intended, and (as you’ll see a bit later) there are certainly stronger words you could end with. Mind you, saying thanks meets 2 pressing needs:

Often though, a person who says you shouldn’t thank people doesn’t give any reason for their advice, which causes 2 problems:

Sadly, many people who advise you not to say “Thank you” don’t suggest a better way to close your speech. That’s understandable, for sure, because:

As a result though, people’s closing words at Toastmasters are often much worse than saying “Thank you”. Here are some typical “closing lines” you might hear (for speeches or other Toastmasters assignments):

So as you can see, if you fixate on avoiding “Thank you” but don’t have a better option in mind, you can end up with a rather awkward phrase in its place.

4 stronger ways to end your talkScroll to Contents ↑

My own opinion is it’s best if you do thank your audience sometime during your closing. And, although having “Thank you” as your talk’s last words isn’t the ideal way to do that (for the reasons mentioned above), nor is it a huge problem. (In the next section, you’ll find several examples on video that show world-famous speakers ending with thanks.)

Ideally, then, how should you end your talk? Well, in this section you’ll find a range of ideas and examples, which I hope suit your needs.

State your call-to-action
A potent way to end’s by stating your call-to-action in a short sentence. For instance, in a talk on lending money (through micro-financing) to people in developing countries, renowned public-speaking blogger Olivia Mitchell said:

Call back to your opening line
A tip suggested by many professional speakers is to end with a call-back, in other words by mentioning something you said earlier. For instance, in Conor Neill’s TEDx talk, he restates his opening line (which in this case was a rhetorical question) for his closing:

Call back to your key point
Here’s another way to use a call-back: If your talk’s just a short statement of your views (like when you’re asked for your opinion in a meeting or interview or panel discussion), try this great 3-part structure for your remarks, with a call-back at the end:

Call back to your talk’s title
Ending with your talk’s title can work well, especially if it’s quirky or memorable. For instance, with Allan Pease’s TEDx talk on gestures, called Body language: The power’s in the palm of your hands, I suggested he could’ve closed this way:

“Remember: The power’s
in the palm of your hands!”

So you’ve various options to close your talk without thanking people, if that’s what you decide on. However, to keep things in perspective, in the next section you’ll find links to 3 extremely successful talks where the speaker did end by saying thanks.

In the table below, you’ll find the 3 most-watched TED or TEDx talks of all time (according to TED). And as you can see, they each end with the speaker briefly thanking the audience:

Now that you’ve seen some arguments on both sides, what’s your opinion?

8 thoughts on “Toastmasters say “Don’t thank your audience”, I say “Why not?””