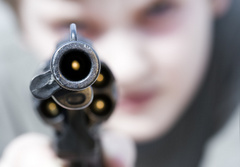 Do you think you’d have bothered reading this post if I’d called it this instead:

This post’s title deliberately uses 4 “keys” to engage you (in just the first 9 words). For a moment, look at the post’s title again. Can you guess what the 4 keys might be? (You probably guessed that their initials make up the acronym PACE.) Well, read on to see how many of the keys you spotted!

(And, for a very pleasant change from so many posts about presenting, this post has nothing to do with bullet points – despite the bullets in the photo above!)

Use the keys throughout your talk

By the way, although this post discusses using the four PACE keys in your title, I recommend you use them throughout your talk. That way, you’ll keep people engaged from start to finish, so your talk will be far more effective. (More on that in part 2.)

Let’s compare the post’s title with that other option you saw above, which I’ll call A and B:

Think about the specific differences you notice between those titles. What effect do you think those differences have on how engaging each title is?

OK, time to tell all. The 4 keys ensure that title A is:

I hope those examples help persuade you how helpful using the PACE principles are, to boost your audience’s engagement.

As I mentioned, not only can you use PACE on your talk’s title – as shown in this post – you can use it throughout your talk to engage your listeners. And you’ll see examples of that in part 2.

So I urge you – remember to make your talks: