Imagine sketching your talk as a simple shape on a piece of paper.
What would you draw?

If yours is like most talks, you can think of it as an arrow, pointing between your introduction and your conclusion:

Certainly, the arrow metaphor fits well with the description you sometimes hear of speeches as “taking your audience from point A to point B”. (Presentation experts like Jerry Weissman often use that phrase.)

Is there a better shape?

What if you
make it a circle…?

What if you make it a circle, where at the end you loop back to the start in some way? And he even gives 4 strong examples of how you can do that.

For instance, you can open with a rhetorical question, and return to the same question at the end. So, if you were a life coach, you might ask:

“What would you do if you knew
you only had 3 months to live?”

Naturally, that’s a potent way to get people to think about what’s most important in their lives, and to act on those thoughts.

John describes making circular talks as being like tying the start and end of your talk together, as though sealing your message inside. Again, that’s a powerful metaphor that vividly depicts the overall structure of your talk: 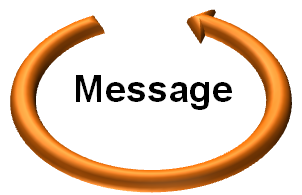 John’s pair of simple graphics (and his discussion) really hit home for me. To some people, the difference between a talk that’s linear and the same content presented in a circular story might seem quite subtle. But to me, its power seems awesome.

If everyday presenters shifted from linear to circular talks, I believe it’d radically transform presenting. No more would people present like they’re reading a dull document from start to finish (which – given the state of most slide decks – they are today).

If you used a circle, you could meet all 3 of these criteria for a great talk:

Namely, consider how the arrow of a linear talk appears to each person in your audience. From their standpoint, people become bystanders, as shown here:

And typically, if your talk’s linear, people can’t properly see where it’s heading. Rather – at any given time – they can only consider what you’ve already presented. So they’re passively heading in the direction of the arrow, from your talk’s opening to its closing.

It’s like you’ve put them on a conveyor belt, and you control not only the direction but also the pace. What’s more, it’s as if they’re facing backwards, too! So naturally, audiences often find talks frustrating, and they don’t get as much out of the process as they could.

Think of your audience as being at the centre

Contrast that with a circular talk. There, rather than your message being wrapped inside your talk as John Zimmer proposed, I suggest you think of your audience as being at the centre: 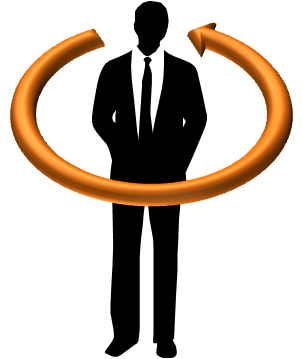 People see each piece of your content in context

Because you link your opening to your closing, in essence you show people where your talk’s heading. And people see each piece of your content in the context of your opening. So when you get to your closing, they’ll already be well on the way to deciding what it all means to them.

It’s as if you’re standing on a hill, next to someone…

Here’s another way to picture a circular talk: It’s as if you’re standing on a hill, next to someone from your audience. You put your hand on their shoulder, and you point out a footpath at the bottom of the hill.

Then you slowly turn with them, both of you following the path with your eyes. To help them follow, you trace your outstretched hand across the scene.

If ever they lose sight of the path, you point it out with your finger. When you’ve come full circle, a glimmer of recognition flashes across their face as they spot where you both began.

That “ah-ha!” moment is the key to “branding the brains” of your audience, so they’ll never forget your key message!

Recently, I’ve come to really appreciate the great impact of tying the end of your talk back to the start. Here’s a great example, 1st posted just a few weeks ago: Conor Neill’s TEDx video, which is well worth 20 minutes of your time.

He too asks a rhetorical question at the start, and returns to that same question at the end. (And for your convenience, Conor’s blog post even contains his transcript.)

So I urge you to think of your talks as circles:

Your audience will thank you for making their task easier, and you’ll stand way out from the crowd!

5 thoughts on “Picture your talk as a shape… Now, what shape do you see?”